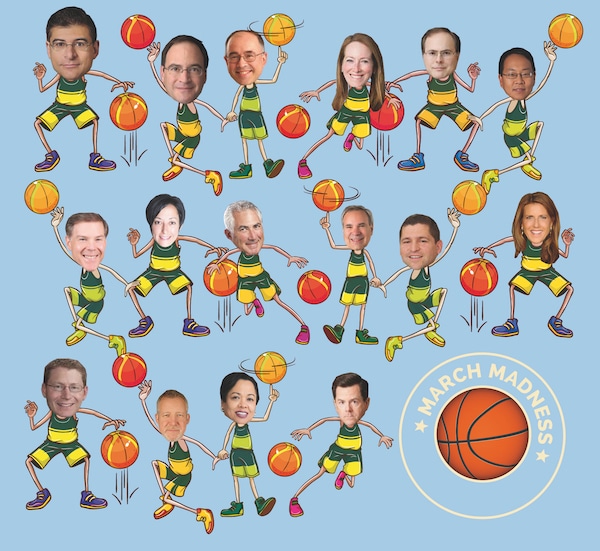 This time of year brings forth the buzzer-beaters, Cinderella stories and high-anxiety excitement to college basketball fans throughout the nation. So, why not extend the fun to the legal world? Many law firms made a strong case to qualify for the tournament, but our selection committee of one presents the Sweet 16:

Matchup Breakdown: Cravath represented Yahoo! in a $4.48 billion sale of the Yahoo! operating business to Verizon and led Johnson & Johnson to a $30 billion acquisition of Actelion. While Simpson Thacher guided Invitation Homes in a merger with Starwood Waypoint Homes worth $20 billion and lifted Avantor to its $6.4 billion acquisition of VWR.

Lateral Link Odds: Cravath comes in as a -180 favorite.

Matchup Breakdown: 2-seed Davis Polk had a strong year by guiding Baker Hughes on its $25 billion combination deal with the oil and gas businesses of GE and the acquisition of Pentairs’ Valves and Controls business by Emerson Electric worth $3.1 billion. The 3-seed Latham squad also made massive gains this year by representing FMC Technologies in a $13 billion cross-border merger of equals with Technip and led Siemens on its acquisition of Mentor Graphics worth $4.5 billion.

Matchup Breakdown: Jones Day stayed dominate this season by defending McDonald’s in a litigation battle with NLRB Manhattan in a landmark labor case all while claiming victory for R.J. Reynolds Tobacco in a nationwide putative class collective action lawsuit in the Supreme Court. The 4-seed Seyfarth took on the challenges of a discrimination lawsuit against Sterling Jewelers brought forth by 77,000 female retail sales employees and defended Epic Systems in connections with a class and collective action alleging that technical writers were incorrectly classified as exempt from their overtime requirement.

Lateral Link Odds: Jones Day is the overwhelming favorite at -300 in this one.

Matchup Breakdown: Always consistent Cahill led JPMorgan Chase as the administrative agent and lead arranger in connection with an amended revolving credit facility and new loan facilities for Mondelez International values at $6 billion but did not slow down there. Cahill also took control on advised Wells Fargo and Deutche Bank with regards to a new asset-based revolving credit facility and Term B loan, valued at $4.3 billion, in connection with Envision Healthcare’s merger with AmSung.  Weil did not disappoint. They led Goldman Sachs and Bank of America Merrill Lynch as joint lead arrangers and joint bookrunners, in a $13.7 billion committed unsecured bridge facility to finance Amazon.com’s acquisition of Whole Foods Market. Additionally, they aided Morgan Stanley as sole lead arranger and bookrunner for Tyson Foods, to finance its merger with AdvancedPierre Foods Holdings, worth $4.2 billion.

Matchup Breakdown: Globally recognized veteran, Kirkland, was a key figure for Blackstone with multiple financings, including the $6.1 billion LBO of TeamHealth Holdings and led KKR in a $2 billion acquisition of Optiv. Financing. Skadden guided Morgan Stanley and Bank of America in a $7.1 billion unsecured bridge facility to Crown Castle International for its attainment of LTS Group Holdings and, additionally, directed Becton, Dickinson and Company in the financing aspects of its $24 billion purchase of C R Bard.

Matchup Breakdown: Gibson helped The Related Companies in obtaining a $1.5 billion loan from a group comprising of HSBC, Deutche Bank, Bank of China and other lender banks. The loan led to financing of 50 Hudson Yards, the project’s flagship property. Additionally, they provided legal guidance to a three-party joint venture consisting of the Canada Pension Plan Investment Board, the Scion Group and Singapore-based GIC. The JV sought to purchase three portfolios of student housing assets in the United States. Sidley showed some resolve in assisting Forest City Ratner Companies in the $1 billion sale of its 51% in a portfolio of 12 shopping centers to Madison International Realty and served Board of Directors of Phillips Edison Grocery Center REIT I in their agreement for the acquisition of the third-party asset management company and real estate portfolio of Phillips Edison, LP, valued at approximately $1 billion.

Lateral Link Odds: Gibson with the slight edge as a -150 favorite.

Matchup Breakdown: Greenberg had an impressive season in assisting a joint venture of Kushner Companies and RFR Holding to buy out four properties located in Dumbo Heights, Brooklyn, from Invesco worth $600 million all while representing Kayne Anderson Real Estate Advisers through a definitive merger agreement, entailing its affiliates’ acquisition of Sentio Healthcare Properties. Sentio brought with it a 16-state portfolio of 34 assets, such as medical offices and senior living. Perennial juggernaut, Paul Hastings, assisted SoftLayer Technologies with the legal aspects of the development and leasing of several data centers located globally and led Nordstrom in the purchase, improvement and physical integration of several congruent properties, to begin creating its flagship store in New York City.

After a few nail-biters, a couple of major upsets and some incredible game-winners, our final for next week is set. Click here to see who will be battling it out next week for the National Championship.